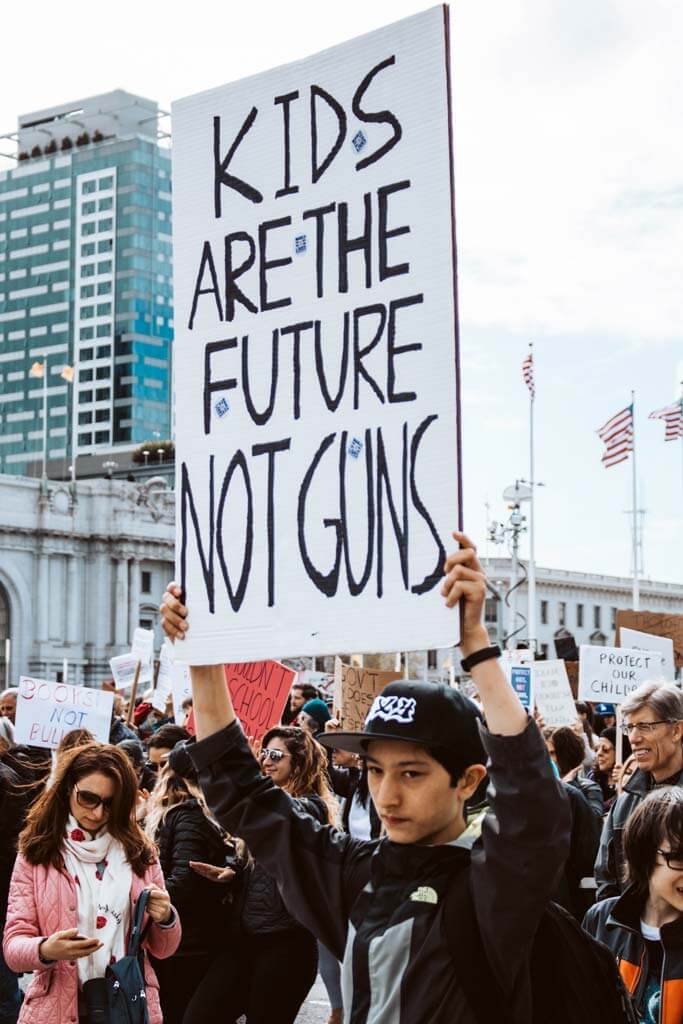 It has been over a year that I had sent you my piece “Playing with Guns” after attending a church Halloween Festival for children that had many games centered around toy guns. I am happy to report that Blacksburg Christian Fellowship has made changes to its Halloween celebration. Shortly after you published my piece I got a call from the pastor of this church that there won’t be playing with guns during its festivals in 2018. Making one’s voice heard makes a difference—even if only at small level.

Unfortunately, gun laws haven’t been changed, even after activism for common sense gun laws hit an all time high after the high school shooting at Parkland, Florida in February 2018. This realization hit me this holiday season, when I spotted beautiful Christmas decorations in the shop window of the Matt Hagan Outdoors store centrally located at the town of Blacksburg, Virginia. The festive spirit lured me into the store. White Christmas tree balls, stars, and angels greeted me right at the entrance. My eyes wandered along the shelves of reindeers with red noses covered in silver snowflakes. Behind all the classy and upscale Christmas decorations implying joy, love and peace, guns were lined up on the wall in the back. I was in disbelief that a store is allowed to sell weapons in town. Citizens regularly come together for community events, including an annual children’s festival called “Wheels and Wagons,” right in front of this store. Children play at the “Blacksburg Children’s Museum” across the store and hundreds of people daily gather at a Multiplex Entertainment center just up the street. Someone could basically enter the store and buy guns, then step outside and commit a mass murder with the guns just purchased.

Sadly, this strongly reminds me of April 16, 2007. That day the worst school shooting in US history committed by a single gunman took place in Blacksburg. My husband, Jamie Bishop, who taught German at Virginia Tech, was killed during this massacre. Thirty-two people and the shooter lost their lives on that day. Many more people were injured and severely traumatized. One would think that this town has a particular responsibility to create a safe public environment for its citizens. Its hands are tied though, even in a blue Southern state such as Virginia. The town of Blacksburg spelled out the Virginia law on the control of firearms (Code§ 15.2-915) for me. If the town did adopt a ban or limits on the sale of firearms it would quickly be struck down and the town would pay the prevailing party’s attorney fees.

Common sense to keep citizens, especially children, safe doesn’t seem to apply to this law, which is fiercely defended by the NRA, even during local street festivals in town and its surroundings. Despite many of these festivals being geared towards families with children, members and supporters of the NRA openly carry guns while decorating their chests with buttons and stickers saying “Guns Save Lives.” Sometimes, the NRA is even having a raffle and the winner receives a gun. Reflecting the behavior of the adults, toy guns are sold and carried around by children.

Whereas the town of Blacksburg has adopted other ordinances regulating behavior at street festivals, for instance the use of motor vehicles, the consumption of alcohol and the presence of animals, it cannot restrict guns in public because Virginia prohibits local governments from regulating the possession or carrying of firearms in any manner.

Am I the only one who feels that these laws don’t make sense? I doubt it. When talking to fellow gun-violence victims and families with children, they also feel uncomfortable at such community events where guns are publicly exposed. As Charlottesville has shown, political messages and weapons are a toxic mix. Why, however, is there not more resistance to such legislation? Why do so many people put up with laws that keep the majority of citizen vulnerable at times when they want to come together and connect as a community?

Unfortunately, I don’t have an answer to these questions. Only the troubling feeling that there is an unhealthy fetishization of guns in the American culture. Like entering the Matt Hagan Outdoors store, I freeze recognizing the horrifying abyss underneath the white-coated surface. When selling angels and guns at the same counter is not considered paradoxical, common sense gun laws will be difficult to implement. Maybe, however, it is the consumer who will be heard eventually. I won’t buy angels in a store that sells guns, and hope others will do the same.

Stefanie Hofer is a Professor of German in the Department of Modern and Classical Languages and Literatures at Virginia Tech. Email: stefanie.hofer@gmail.com