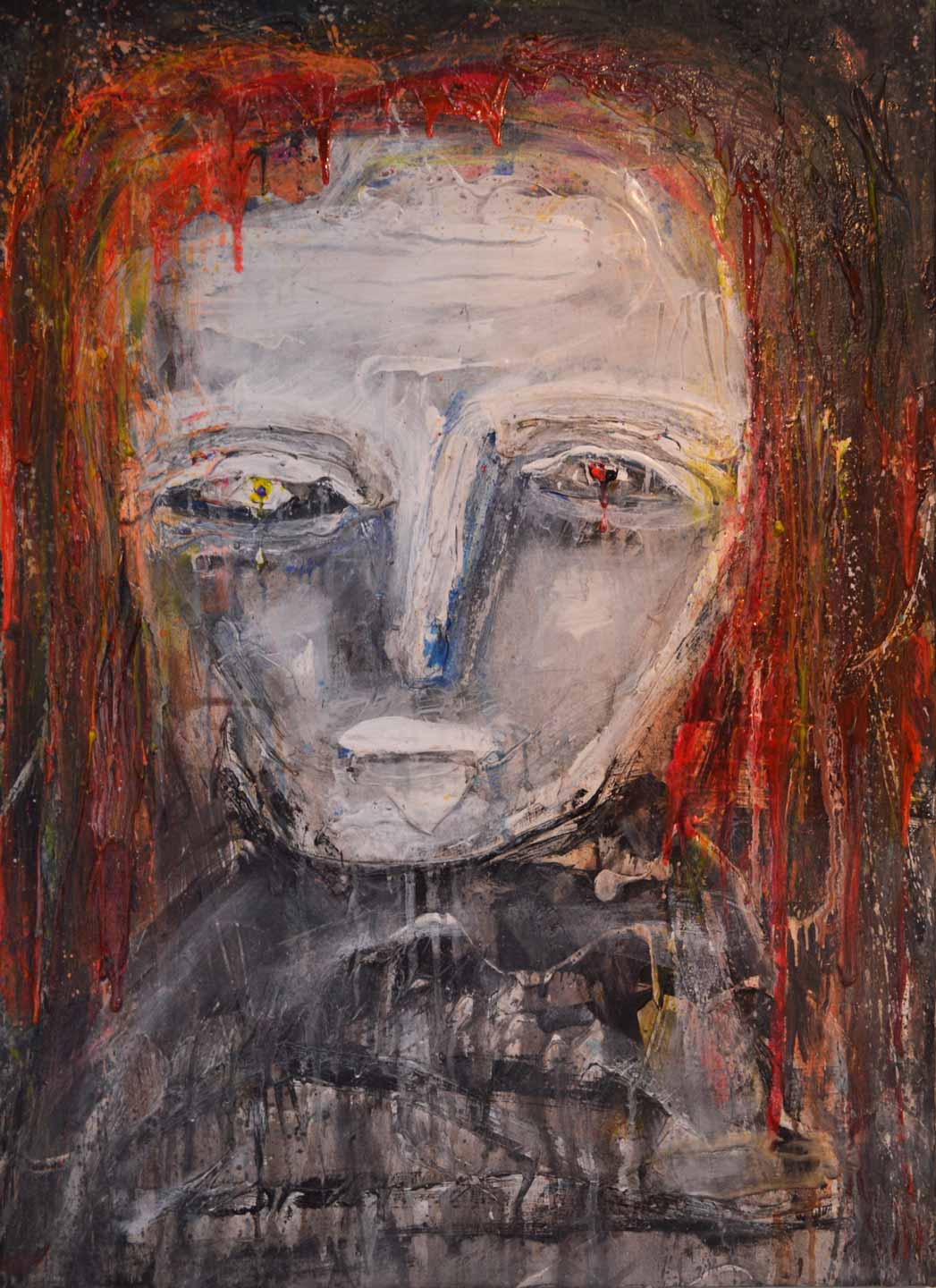 by Roberto Echeto. Translated by Mafe Izaguirre and Anayvelyse Allen-Mossman. Artwork: My neighbor by Juan Mariño.

The news about Venezuela is as alarming as it is strange. Each day brings a new mix of tragedy and absurdity.

Every Venezuelan (or anyone who has spent time living in this country) knows that anything — however rare, excessive, unreasonable, outrageous, or illegal as it may seem — can happen.

Venezuela is no longer a country; it is a layering of misfortunes and problems with no pretty solutions.

The supermarket shelves are empty. Entire aisles are filled with air and with products selling at inaccessible prices. The pharmacies are empty. There are people, more and more people, asking for antibiotics or blood pressure medicine, antidepressants or antihistamines. People are desperate and are searching everywhere to find medications that no longer exist anywhere.

The Venezuelan economy is destroyed. There is no cash. It is difficult to believe how very few bills are circulating. Since 2003, there have been a strict exchange control mechanisms in place and the government has intervened in all productive activities using arbitrary takeovers and expropriations, fiscal audits and price controls. Over the last few years, the central government participated in strange and risky financial operations, the consequences of which erupted in October 2017 in the form of a fatal hyperinflation.

The day ends early. At six o’ clock the streets empty out; orphaned of people and light. There are few streetlamps, few illuminated billboards, little — very little — nightlife. There is a thick silence in the air. Everyone is shut away in their homes; they sleep, cook, ponder in front of a screen, chew on their sadness and unease between the four walls of their homes. Better to be at home than in the street, that preserve of strange people, zombie-like vagabonds, forgotten and barefoot children who now go around in groups, screwing with each other, screaming at each other, begging for food at bakery doors.

It’s no longer safe to leave bags of trash on the street to be picked up before the garbage truck. There are always people rummaging through them, looking for food and leaving the sidewalks full of waste, the scraps and decomposing pieces quickly turning into beacons for the flies of the world.

In the landscape, hunger hangs between the sun and the stars — overbearing, overflowing and unforgivable disgrace.

Venezuela is the country of fainting, of bony people who travel pressed up against each other in cargo trucks (not in buses where it is no longer possible to change a tire or buy a battery) Venezuela is also a country full of the suicides of people who can not live anymore under this burden of suffering and who finally abandon themselves in this last painful act. Venezuela is a strange and afflicted space, facing the horror its people have bestowed upon it a thousand and one times.

Over the years nothing has been more fertile than corruption.

Governed by Chavism, Venezuela became a vortex of shady business, the everlasting spoil of hundreds of hyenas (nationals and foreigners) who gorged without fulfillment.

The unfathomable darkness of the soul. The lack of control. The addictive pull of wealth fed an idea that we could feed forever on something that would never end, something that emanated naturally from our bones.

All of Venezuela is full of orphaned buildings. The government executed an ambitious and disorganized housing plan that filled the country with images straight out of Pyongyang, bringing into relief how the old plumbing and electric systems have not been properly maintained or replaced for years. The result? In all of Venezuela, there are long and disgraceful blackouts. Water runs two days a week.

Venezuela is full of unfinished works. Anyone who travels the main Central Regional Highway between Maracay and Valencia will see kilometers of huge columns supporting the air or holding vast structures of oxidized metal. Anyone traveling along the eastern approach to Caracas will see the same enormous concrete pillars, the same abandoned corroded structures. These two precocious ruins are part of an unfinished railway project that has been postponed dozens of times. Only when the presidential elections approach are the plans dusted off. Only then are workers contracted. Only then does heavy machinery begin to produce the false dream of progress. Only then is another long and dismal train station joined to the straggle.

(Simulate that there’s a train. Simulate the country’s progress. Simulate and simulate like an enormous and prodigious theater troupe.)

It would not be correct to say that Venezuela discovered its violent vocation thanks to Chavism.

Let’s just say that the kindness of the climate and the people’s eternal smile hide a truth that can no longer be hidden: Venezuela is a violent country with a history of bloodshed swallowed in time.

One need only look at number of murders and robberies to realize that beyond the proliferation of illegal arms, drug trafficking, violent vendettas, and theft, there is almost a morbid pleasure in having a pistol tucked in your waistband or between your hands. There is nothing more seductive in this country than carrying a gun in order to terrify others. What other explanation can there be for the endless calling of the Venezuelan military? Or for the proliferation of thugs?

It’s almost as if all the complexities, all the deficiencies, and all of the resentments acquired the form of a rifle or a revolver.

It’s certainly true that when Chavismo came to power, crime was already out of control. The central government claimed it would put an end to poverty and impunity — those two conditions that stimulated the growth of the underworld. As time passed the government slackened their grip on criminals and ended up encouraging the formation of armed groups who could harass their opposition and defend them if needed. In other words, crime became the intimidating weapon of the government.

The Venezuelan opposition has not been up to the challenge that Chavism represents for the country. The actions of the opposition over the past twenty years have been erratic, contradictory and, in many cases, lukewarm. It has been incapable of generating an alternative platform to Chavism’s own messianic rhetoric.

It could never define its adversary. Only total ruin has forced the opposition to realize that the Chavist project consisted in destroying the country in order to dominate and stay in power.

Perhaps it was the fear of open confrontation with Chavism’s left-leaning origins that made the opposition act with such caution and leniency.

Empty. It feels empty. Everywhere, empty. People who have left: friends, acquaintances, neighbors, colleagues, family. No one knows precisely how many Venezuelans have left. Some say three; others say four million. Who knows? The only thing left is emptiness, the memor y, the space in the a ir, the distant news on Whatsapp. Those who have left speak of the emigrant’s epic. Those who have stayed don’t say much to us or to the news. Some take care of the elderly —their own or ones they have adopted. Whatever the circumstances demand. Others take care of houses, apartments, dogs, cats, gardens, and their businesses running ever tighter margins. Outside, no one speaks much of those who stayed. They want to believe that their lives haven’t changed; they want us to believe that things are the same. They have nothing to say beyond the heroic effort it takes to buy cheese or sanitary pads.

The children wearing surgical face masks cry out from their wheelchairs to continue their chemotherapy. The thin, doubled-over, dry men, and women beg for machines that would allow them to continue their dialysis. The starving elderly demand their pensions. There are people pleading for antiretrovirals and medications that will make the organs transplanted within their bodies work. The weakest are fighting for more than their lives— they are fighting for their dignity. ■