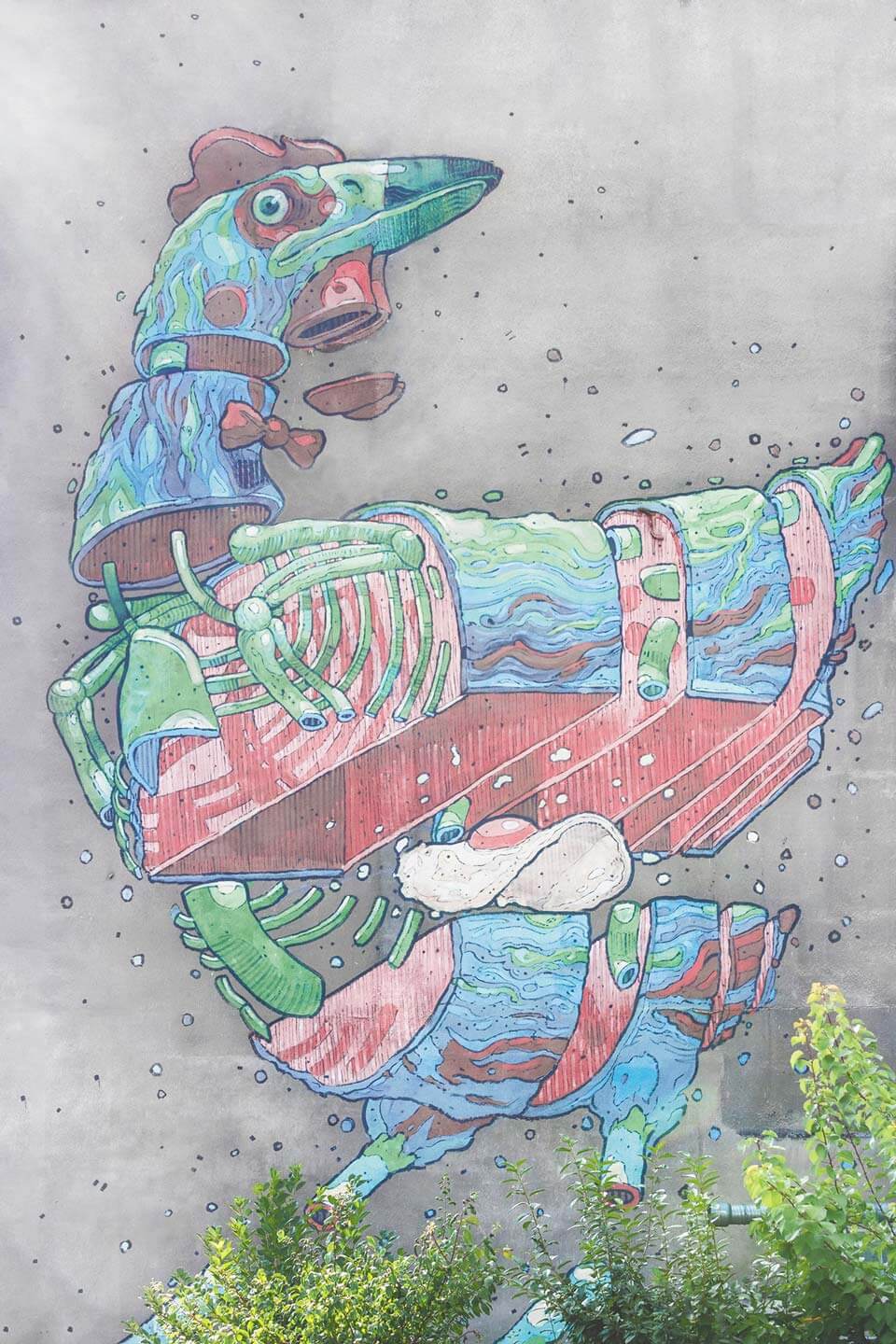 It had been an unseasonably hot day in July. The news said—improbably, I felt—that it didn’t break a record. The fifteen chickens in the coop next to me panted through their open beaks, spread their wings to create shade, or moved within the stingy shadows, one pecking the neck of another to get a place to scratch down to cooler earth.

They didn’t seem to pay attention to the corpse of their sixteenth member. But the little boy did. His parents were boxing it up before taking it to the woods. There, the carrion birds and earthy creatures would dine, performing their life-culling moves on the dead.

The little boy mostly paid attention to the box. It was his first sentient encounter with death; they were still fairly new to the little farm. He seemed to take it in like the many other big parameters of life he was learning. “Why?” he’d ask, and he’d get an answer. So, he’d think: That is what it is. There’s a bird who is sweet and funny and lays eggs. Then a limp body. It goes to the woods in a box. It gets eaten. I wonder where she is for a while; there’s an empty feeling; she comes to mind at story time. After a bit, another one arrives—a fluffy baby bird. She gets a name too.

Lucky boy, I thought. He’ll need that experience for all the years of his life.

My mind turns to talking with a colleague the week before; we had chatted about what maturity is. The ability to feel deeply without being unmoored, we agreed. I ponder again something not orthodox: children can be so much more mature than adults. Especially when it comes to death. And I don’t think it’s simply a lack of understanding.

Letting old lines of thought drop, I re-explored the idea. Maybe maturity is not so much related to chronological development. Or to experience. Or age. Or even proximity to death. Maybe it’s more related to our “internal objects” (those we carry around inside us, the people who formed us, living or deceased). Maybe it’s also a little related to our “external objects” (those we live our lives with).

I settle in, abandoned to the whim of the reverie. The chickens make gentle sounds.

So, maybe he’s a lucky boy because of his internal and external objects. The avian turn in nature’s scavenger life cycle brought him an experience that primed an ability he will need. But that priming and emerging ability could happen only within his relationships. His thoughtful and loving family makes him mature in the sense that he can feel deeply without being unmoored.

All that would make some sense of what my colleagues in pediatric palliative care seem to agree on: children have an ability easily as great as, if not greater than, their adult counterparts to face their own demise with an open heart, with loving relationships, and with equanimity. (Loss of a family member, not so much. But that’s for another time.)

While that equanimity among dying children is accepted as common knowledge in pediatric palliative care, it’s not so much accepted elsewhere. So, I review in my mind: What does it take for adults to find maturity about mortality? Well, that’s a silly question. I check myself: wait, we often don’t. But creatures have been dying, grieving, and moving on since the beginning of time, and we must have learned something. Some people have some maturity about mortality.

This is what I think I know, partly from (adult) palliative care and partly from psychoanalysis.

First, I know  it takes a holding environment. Dying people find what they need to when they feel emotionally supported by people who care about them. Not that those people can fix everything, but that they are there, they get it, and they care.

Sometimes, those people who are holding are physically present, sometimes not. Sometimes, they are dead, but if so, they are one of those internal objects. Apparently, it still works. Maybe that’s what those daydreams are about that people near death have—the comforting ones where a long-deceased person is there talking with the dying person. We really shouldn’t call them hallucinations.

I go back to my checklist: What else do I think I know? Inside that holding environment, people can do certain things. They can face reality. The stark reality of our finitude seems easier to face when with others. (I feel glad for the bird.) Maybe mortality is modulated by the sense of continuity that is engendered by care and by love—even by the connections that come with aggression. A holding environment created by people who avoid reality undermines things. But a kindly, validating common perception makes even harsh reality more readily faced.

Digesting reality is the next thing people can do better when in a holding environment. Figuring a way to live with the tough, unalterable reality is possible with—and near impossible without—such an environment. So many little and big things need corroboration:  “Who will take my things…the kids; OK, good,” “Life ends for me and goes on for others—for a while.”

This digesting seems to entail having a way of thinking about the harsh reality—a way that works for us. The little boy will have a way of thinking about death, about how, one day, a feathered creature is moving about, squawking and waddling, and the next day, it is motionless with glassy eyes; about how nature takes care of the body; about the empty feeling and memories; about new life. He has that way of thinking because it happened where he did not fear being left without love or guidance; he watched it; he participated in it. It touched him but didn’t wound him. Not all adults have that in their past; they have to create it late in their days. It’s hard for them, oftentimes.

That stuff the little boy got, as we learn from Wilford Bion and others, is where thinking begins. We perceive something; there’s a feeling we don’t know what to do with (why is she on her side, still?). A caring figure takes that feeling and helps us understand it (bewilderment, fear). We get back from the caring figure a way of thinking (we all die; it’s OK) and feeling (we care for the dying) that seems to work. And then we can move on. We can build some more ways of thinking and feeling about more experiences. I think it’s harder for adults to learn to think about something they didn’t think about when they were young.

This little boy learned early how to think about and feel mortal loss. A loss not too small (he did love that bird) and not too large. Now he’ll be able to think and feel bigger losses if and when they arise for him. He’ll be able to grieve the loss of others when he has to. Hopefully, he will be well underway with understanding he, too, is finite; he won’t have to grieve his immortality too much, because whatever fantasy of immortality he may have had has already been bounded by reality.

My mind wanders on, and I reflect on how, when adults do arrive at a way of thinking about our own death or that of our loved ones, we often start to do something interesting: we start changing our relationships. If we are young and healthy, we start living our relationships with an eye to them being their best possible, as if we might die tomorrow—because, of course, we might. And we discover the vitality that comes from living that way. If we are sick or old, we start repairing our relationships; we start getting our beloveds ready to live without our warm body and our wherewithal next to them. We invest in relationships, in legacy-making. We start seeming awfully mature. Kinda like the little boy.

The shadows are lengthening. The chickens are moving toward their roosting spots. All the terrible things in the frightening, rapidly changing world around us feel more manageable. Like I can think about them. It will be what it will be; I’ll know where I am, where I belong, where my loved ones are. Even when we die, I’ll be with them and they with me, inside or outside. Does finiteness make love necessary? Is it a condition of love? I wonder. If I had a choice of love or immortality… well, I’d choose love. That wasn’t hard. ▪

POLLUTION: THE CASE OF INDIA by Shreya Varma
October, 2020
Sponsors