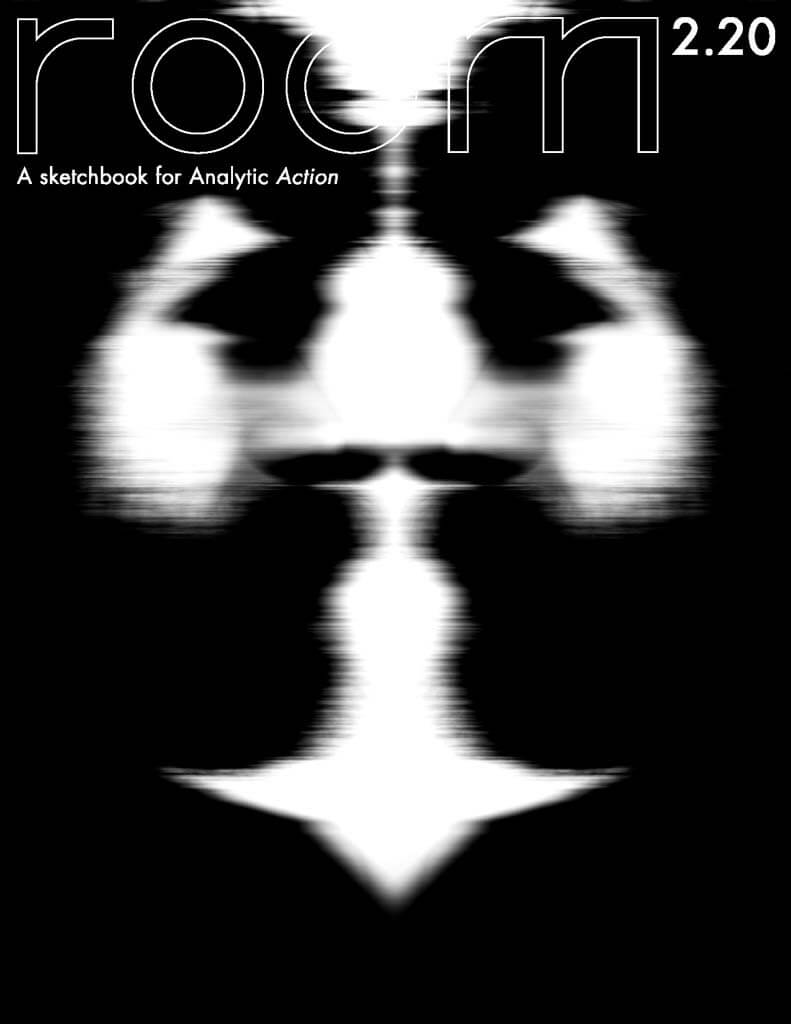 If I could at least get them to feel that

this trembling beneath us

means we’re on a bridge.

“To be stupefied,” Jared Russell explains in his provocative essay Stupidity, “is to regress in the face of the unexpected, to have one’s critical faculties paralyzed.” The contributors to Room 2.20 may be terrified and even heartbroken in the face of the unexpected, but they are not stupefied. They have some very clear ideas that we need to hear. They are telling us that we are living on a fault of our own making that is bigger than the San Andreas, and we are feeling the tremors. Each of these authors are telling us how, when facts and reason hold no sway, when fear, anger, and yes, even love render us numb or blind, we are failing spectacularly and tragically to live up to our humanity.

Iris Foder writes in After the War that she really believed the violence would stop, the poverty would end, and the celebrations would begin in the Bronx. Michael McAndrews recalls in War and Grief  his experience aboard a nuclear-powered aircraft carrier the day after Trump assassinated Soleimani, during a different “tense state of belligerence” with Iran. “I surely wasn’t the only sailor in the American or Iranian Navy who was relieved when the crisis was averted. I feel,” he writes, echoing Foder from a distance of three generations, “both too old, at thirty-four, and not old enough to see history repeat itself.”

And Then It Was Over completes William Harris’s homage to Marshal McLuhan’s prophetic vision of how media would come to infiltrate our souls and stop time. Beginning with “Twitter Dee Twitter Dum” (Room 6.18) and progressing to “Still Here” (Room 10.19), Harris’s triptych has taken us from an initial jumble of horror to the tense marking of days, to now “living in an earthquake…awaiting the aftershocks we know will come.”

Daniel Benveniste lived through the political earthquake that destroyed Venezuela and has seen the violence, prejudice, and hatred that authoritarian bullies like Chavez and Trump incite. He has witnessed the consequences of their Faustian bargains: “There are enemies out there; stay close to me and I will protect you.” In Diving into the Stream, Benveniste describes what it was like to be swimming in a sea of “political countertransference.” “Sometimes in the presence of political tyranny, which threatens the very conditions of the analytic process, one must take a stand. How can a patient free-associate,” he writes, “if there is no free speech? How can a person think freely if there are forbidden topics?”

Arnold Richard’s entire life has been infused by an indomitable Spirit of Activism. In this poignant interview, he tells Room’s editor Aneta Stojnić, “I think all psychoanalysts perhaps have a special obligation to become activists for causes that affect the lives of their patients. There is no way of treating a person separate from the fact that they can’t have health care or if they are in an environment that is going to kill them. So you can’t really isolate what you do in the office from what you do in the world.” Coming from a different direction, Daniel José Gaztambide found he couldn’t isolate the world from psychoanalysis. Liberation Psychology is the story of how, as a child growing up in Puerto Rico, he came to write The People’s History of Psychoanalysis.

“The most basic concept of psychoanalysis is that our sources of motivation are unconscious and therefore hidden from us,” writes Ofra Bloch, a New York psychoanalyst and filmmaker. Consciously, Bloch, who was born in Israel in the aftermath of World War II , knew only that she wanted to interview children of former Nazis and neo-Nazis in order to stop her own cycle of hate and othering, but the project compelled her to also interview Palestinians whose homes were stolen and whose family members were murdered. In Afterward, Bloch brings to the screen the strength that was required to hear and connect to these “others” amidst her own rage and guilt and sadness. “I was unaware,” Bloch writes, “that I was making a film about myself and my own journey of discovery and change.” She was undoubtedly also unaware of the impact that her personal journey would have on her film’s viewers. In her essay and film, we witness the powerful potential of analytic space to contain the untenable.

Michael Diamond and Sheldon Bach use their psychoanalytic understanding to examine the collapse of our democratic space. In Trump’s Wall, Bach suggests that the rapid technological and societal changes over the last decades have left many people feeling unmoored and alone. Our president’s “frantic attempt to replace loosening internal structure with a dictatorial external structure” has a cultish appeal to a populace in a state of disorientation and sudden loss. In The Fissure, organizational theorist Michael Diamond writes that the bipartisan split, fueled by projection and disinformation, has resulted in a deadly fissure that threatens the collapse of our democracy. Diamond believes we must continue to “neutralize” this violent state of affairs through the testimonies of nonpartisan civil servants and through overpowering the lies and projections with “reality-based counter-messaging.”

Taking a different slant on societal destabilization and political polarization, Chris Bell’s and Gary Senecal’s essay Projective Identification: Unconscious Defense or Conscious Offense directs our focus to an insidious psychoanalytic phenomenon. By insinuating that his opponents operate using malevolent tactics at his own primitive moral level, Trump’s projections create a “false equivalency, rather than enabling clear symbolic distinctions to be made.” “Projections have a psychological impact upon their recipient or target, leading them, if only momentarily, to identify with the projections. Thus, not only can public perception be subtly altered and destabilized by psychological projections, but also the recipients/targets of projections can themselves become ensnared in unwanted identifications precipitated by the projections.” Don’t be fooled, Bell and Senecal warn us. This is no unconscious accident of mental instability. This is a powerful weaponized strategy meant to destroy and conquer.

But as Daniel Rosengart adds in his essay Reading Racism Deeply, there are also unconscious libidinal forces at play equally capable of devouring and destroying. “If we read racist discourses as having no more potential than as hiding places for hate, we impoverish the racist’s unconscious and forget the fact that a symptom is fundamentally an act of creativity in a mad world.” It is an extraordinary analytic feat for Rosengart to imagine fascism or racism or sexism as “an act of creativity” even in a “mad” world. But, Zak Mucha writes in Reassembling Fragments (a poetic/psychoanalytic act of creativity in and of itself), “Analytic work demands we incorporate the uncertainty of the world, the unknowable, into our existence. The horrific what ifs, what nexts, and shoulds and the dread of how do they see me exist, marking the unbearable anxieties left wordlessly outside of our narratives while driving our behavior.” Let’s just say there are certain narratives that do try our souls. It isn’t easy.

For three years now, the authors and artists who have contributed to the creation of Room have been telling us that we are living on the edge of crisis. The historian Walter Benjamin believed, based on an understanding of the oppressed, that all of history might be defined as a perpetual state of emergency. Psychoanalysis understands this well; psychoanalysis recognizes that the present is inextricable from the past, from that which has been oppressed and repressed and all that has come before. We know that consciousness is a state of perpetual emergence. Russell’s essay echoes what Benjamin wrote: “Thinking can suddenly halt in a constellation overflowing with tension.” The writers, artists, filmmaker, and psychoanalysts who have contributed to Room 2.20 are thinking hard. The tremors beneath our feet are increasing – and we are paying attention. ■