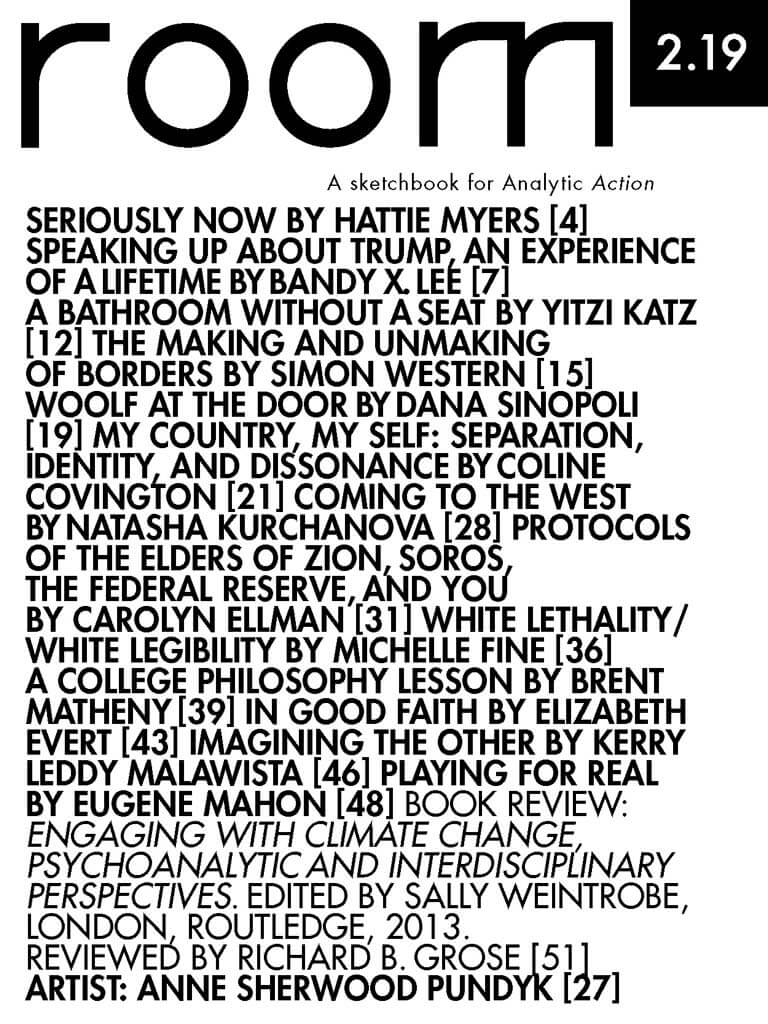 Room 2.19 is about the powerful intrapsychic and geopolitical forces that threaten to hijack our minds, souls, and agency —and along with that, our communities and countries. The authors cross three generations, and their essays have arrived from all over the world. They are addressing boundaries lost and found, stretched and permeable; identities destabilized and reconstituted. And from different perspectives, each writer calls upon us to think carefully and act decisively because our future depends upon it.

In Speaking Up about Trump: An Experience of a Lifetime, Bandy X. Lee, editor of the book The Dangerous Case of Donald Trump: 27 Psychiatrists and Mental Health Experts Assess a President, describes the price she has paid for daring to suggest that government officials and mental health professionals have an ethical responsibility to speak. Reading about the slander and death threats she endured, it was clear to all of us on the editorial board that, in another country, Lee would have been jailed. In this country, she is still free to tell what happened. Yitzi Katz also tells us what happened after he spoke up: nothing.

In A Bathroom Without a Seat, Katz interprets the psychoanalytic meaning and ethical implications of a clinic in Jerusalem willfully disconnected from the concrete needs of its clients. His story makes a larger point as he illustrates how universal aspects of care and healing are embedded in the particularities of physical space. In her essay Woolf at the Door, advocate Dana Sinopoli carries Katz’s point from Israel to the US–Mexico border: “It is impossible to separate the physical spaces these children are kept in from the message that there is no room in this country for people like them.” What Sinopoli, who is a candidate in psychoanalytic training, doesn’t tell us is that six months ago, she authored a letter in response to the zero-tolerance policy, which was signed by over 21,000 people and 200 organizations and was delivered to all three branches of the US government. Thousands of children have taken a permanent place in her mind. These children must find room in all of our minds, she tells us, if they are to be able to find room in their own.

Simon Western and Coline Covington turn a close lens on ways shifting geopolitical forces affect our identities. In the Making and Unmaking of Borders, Western describes the large-scale and alarming consequences to communities and individuals as borders appear, disappear, and become porous with greater and greater frequency. In My Country, My Self: Separation, Identity, and Dissonance, Covington gives specific examples, from her life
and from the lives of her patients, of the ways these kinds of dislocations rock our psychic world. “Only when there is a break in one’s life,” she writes, “does the question of identity and belonging arise.”

In their essays, Natasha Kurchanova and Brent Matheny share dramatic breaks in their lives that precipitated questions of identity and belonging. “Falling in love with one of those foreign students and coming to the United States in the mid-1980s was not an accident,” Natasha Kurchanova writes in Coming to the West, as she thinks about how her experience of having two countries has changed over the course of her life. In A College Philosophy Lesson, Brent Matheny describes how, after moving to a “space he knew he wanted to belong to and felt he had some space in,” everything shifted the morning of November 6, 2016. Suddenly, Matheny was given to see something undreamt of in his philosophy. What he saw changed his life, and he is running with it.

In line with Matheny’s epiphany, Elizabeth Evert, in her essay In Good Faith, forcefully addresses the ideological splits dividing our nation. To bridge these gaps, she suggests we imaginatively and courageously step outside our comfort zones to find likeness in our differences. In Imagining the Other, Kerry Malawista is thrown out of her comfort zone when she is confronted with a horrible realization. The connection she forges with this shameful part of herself brings her to a finer understanding of that which threatens us all.

The threats to humanity that the authors in Room 2.19 describe are as overt as the conspiracy theories Ellman explicates in Protocols of the Elders of Zion, Soros, the Federal Reserve, and You and as covert as Fine’s descriptions of  White Lethality/White Legibility. In these essays, Ellman and Fine show us how to imagine the unimaginable; they plead with us to stretch our minds to join them. “Serious daring,” writes Eugene Mahon in Playing for Real,
“requires serious thought.”

Room 2.19 dares us to think seriously together. ■