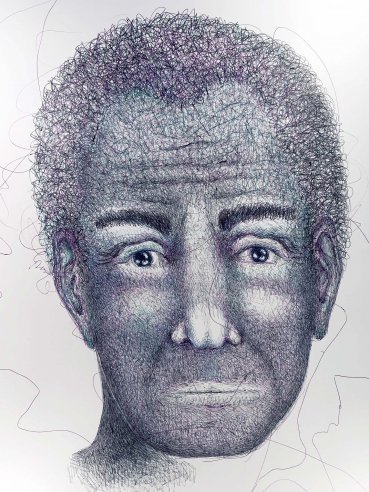 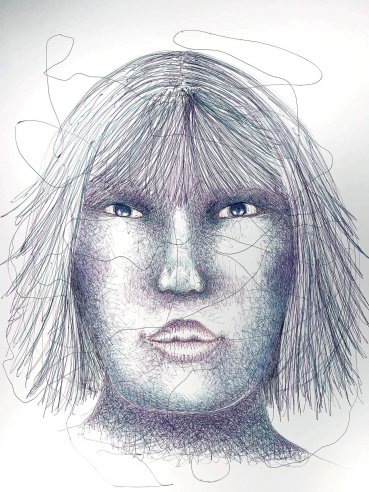 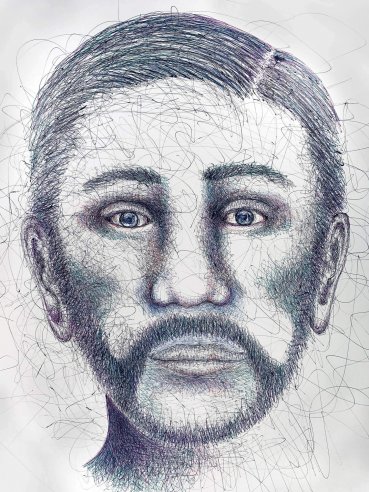 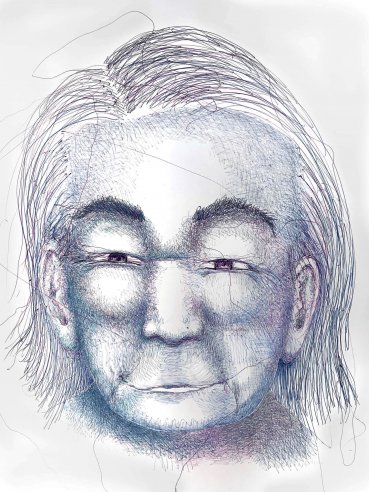 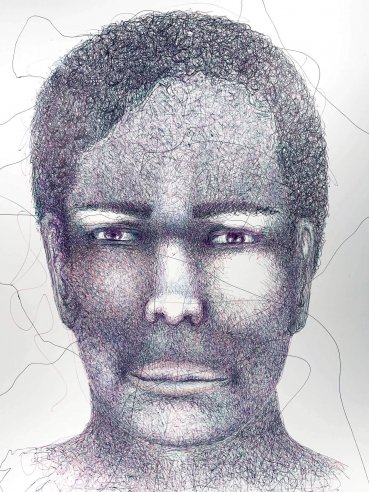 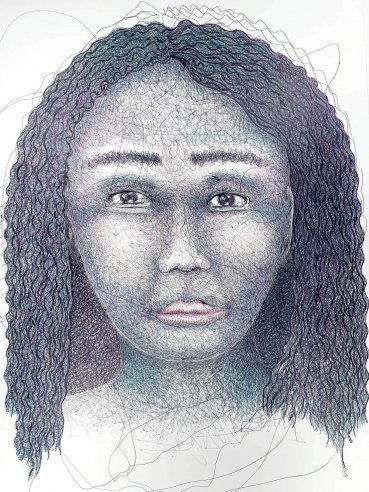 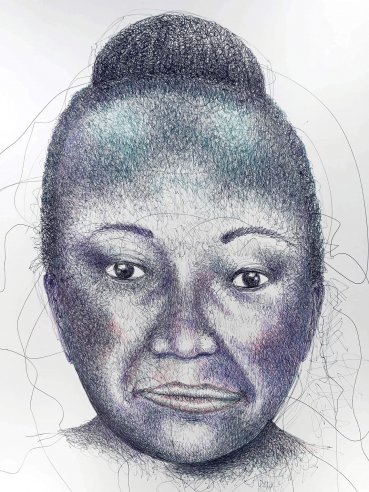 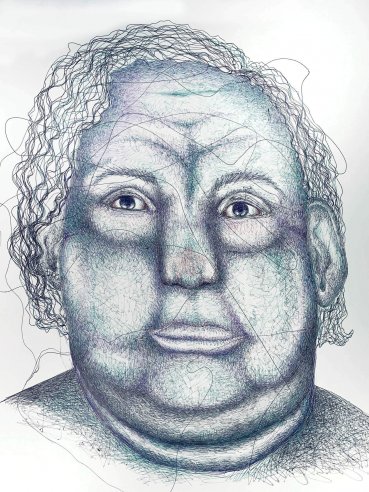 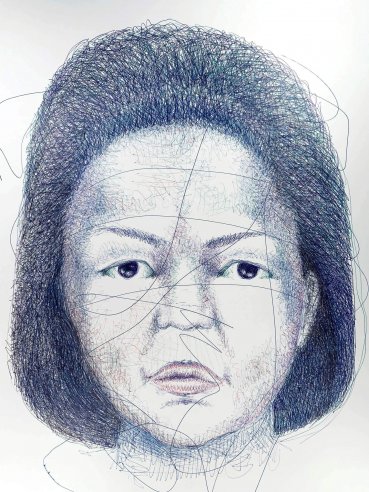 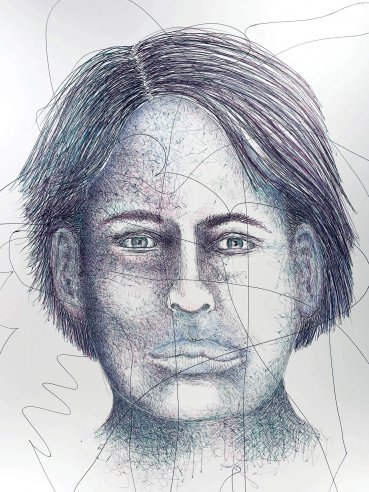 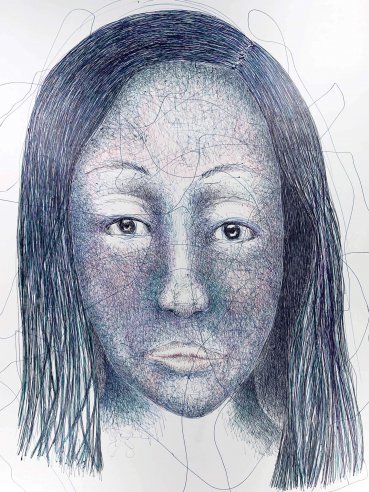 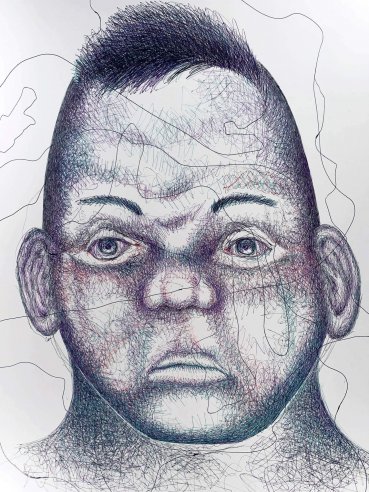 This is Famly of Humans. “Who are they?” you ask.

My pen created 150 portraits over the course of nearly two years. In each case, the result is unbidden, unplanned, and always a surprise.

At the outset, I approached my materials without a defined purpose. It was never a project nor a plan, just an itch to put plain means to use. These tools are not exotic; the paper supply resides on my shelf. I use smooth, not artificially coated, paper. I require a surface that reveals my stroke without imposing its own willfulness. The pens are in the drawer. They are office-supply-store ballpoint pens—the same pen I have employed many times before. The manufacturer might be startled to see it used to create my fine tangle of marks too numerous to be called a line, but for me, it is the perfect implement. I favor ordinary materials with which to create the work.

My objective is meaningful contribution to artistic honesty. I do not wish to make “pretty” pictures. Although I hope to please my audience, I do not pay homage to trends. I take delight in inventing new ways to achieve self-expression, to pursue a developing theme with integrity until its complete and utter conclusion is reached. I call my process “brain dumping.”

After two years, the conclusion of Famly of Humans has not been reached. One hundred fifty 17” x 14” faces populate Famly, yet there remains an unknown number of individuals yet to be acknowledged and realized. The series is a lifelong escape into my subliminal world of inner space, an activity in which I have engaged many times during my art career—a result that transpires when I put pen to paper.

Portraits emerge very gradually during the almost meditative four to five hours needed to produce a Famly member, with the absolute best part being the gift of surprise at the end. During the process, almost imperceptible subtleties can produce major variations, and a face that seems to start out as one person can progressively transition into another. The most subtle facial nuances—such as shape of the eye, set of the mouth, position of the features—cause dramatic transformation. That is why the many faces in the series are different, as in life, while possessing the requisite elements. Time-lapse photography of my process would show how the dizzying array of strokes ultimately coalesces into the portrait of a feeling, breathing person.

Each on-paper, themed series in my much-varied portfolio of face art includes an extended number of pieces. Although many separate components representing former suites have been widely exhibited, ultimately those that are not purchased are carefully catalogued and relegated to the archives, however worthy they are of marketable attention. What does one do with an abundance of product?

But I get ahead of myself. The work begins with a rangy line that swirls aimlessly around, emanating from the unknown, craving to codify into something visually substantial. This random line is clearly visible in almost all the portraits, as if to remind us of the mists from whence they arrive.

My process continues with the space between the eyes. There is no other way for me. This is the most complex point, anticipating a hurdle over which I have significant practice and experience yet needing to push myself to intrepid pursuit. Then the implement takes over, the seed starts to germinate, initial marks are made, inertia is conquered, and confidence is forged with the knowledge that I can mold the result to my liking.

Occasionally, artist friends share how they get stuck during the progress of a piece, not knowing how to resolve it, that they don’t know when a painting or drawing is finished or that they are dissatisfied with the final product. I appreciate and understand, but I am not subject to these reactions. I don’t get stuck midstream; I work undauntedly until I’m content with the outcome; I know when I’m done.

Like a soft bed when one needs to be comforted and lulled into a place just the other side of conscious, my inner life has always been a refuge. My art, most recently exemplified by Famly of Humans, and salved by meditation, reflection and therapy have helped me overcome my childhood. But there are things one never gets over.

As the only sibling of a brother three and a half years younger who was severely handicapped, I experienced acute isolation caused by his disabilities. I am aware that the term “challenged” is now more acceptable than “handicapped”; however, “challenged” is a word that can imply the possibility of improvement. For him, there was no possibility. For my parents, their entire existence consisted of trying to, “make Bobby normal.” They adored him. I, as the one who did not need special care, was allowed no friends. I had no books. I had no art materials. I had no pets. We took Bobby everywhere. People stared; children snickered and pointed.

I was convinced my parents wished it had been me rather than him. They introduced him to others as “Linda’s brother”—I was sure he was my fault.

Tribal identification may have been part of the primordial grand design to serve the preservation of humankind, but in the modern world, it long ago ceased to be beneficial. Yet we are plagued by it still, afflicted with systemic racial prejudice; human rights and dignity are trampled upon with mind-numbing frequency every day. History is rife with the pervasive blindness of the power strata, with present-day behavior an indication that little has been learned.

Famly of Humans seeks to illustrate how we all are equal, regardless of the color of our skin or the shape of our features. It begs acceptance of the idea that tolerance and respect without judgment can exist. By presenting a disparate population in microcosm where no one is prejudged and there is no exclusivity, Famly of Humans promotes the idea of diversity where we are all on equal footing, no one is marginalized, and social acceptance is the norm.

The inseparable unit of individual works of art in Famly of Humans is deliberately without personal identity. (I have given them all first names, chosen at random, for the purposes of organizing their portfolio. In some cases, the name occurred unbidden.) They gaze straight at you, completely expressionless, rendering you virtually incapable of discerning anything meaningful about them. As real people, they could then advance in life based upon who they are, not what they look like.

In a situation where a stranger is encountered, an immediate awareness of skin color and appearance can lead to an impulsive opinion. Some would venture, “I don’t know you.” “You don’t look like me.” “You don’t come from my town/city/country.” “You don’t belong here.” But if you were stuck and in need of help, the very person you rejected might be the first one to run to your aid.

Famly of Humans are ordinary people—male, female, old, youngish, dark-skinned or fair, curly-haired or smooth, gay, trans, nonbinary, straight, ethnic, and so on. My cast of characters, literally born of their own will, can be said to channel a collective conscious—a cross-section of humanity without derivation from any group or nationality.

The twelve emissaries pictured here represent their 138 siblings in Famly of Humans. They tacitly ask: “Can you view me with an open mind?” “Can you see me unpresumptively as a person who is breathing and has feelings perhaps similar to your own?”

Choose any example. She or he could be from another country; could be a billionaire, a doctor, a diplomat; could be illiterate; could be homeless; could be a terrorist. You simply cannot know.

Choose another. She or he could be a United States senator, a famous chef, your next-door neighbor, or the someone you hired to walk your dog. You simply cannot know.

Look at each of the others. You can see that almost any biographic text would work. What does it mean? It means that you cannot judge a person by the way they appear.

Famly of Humans does not pretend to unravel the complexity of prejudice, but to illuminate with artful images that identification, based upon physical characteristics, is impossible. Discrimination within the human family is damaging and hurtful to those against whom it is used as a weapon. It is pointless and absurd. We all share our Earth—we are one Famly of Humans.

NOTE: Famly of Humans does not include the letter i, emphasizing that WE are all family.

A VISUAL ESSAY ON OTHERNESS by Daniel Derderian
October, 2020

GHOSTS OF OUR FORMER SELVES by Eric Chasalow
October, 2020

A DEEP DIVE INTO THE HUMAN MIND by Rafaél Silveira
July, 2020
Sponsors