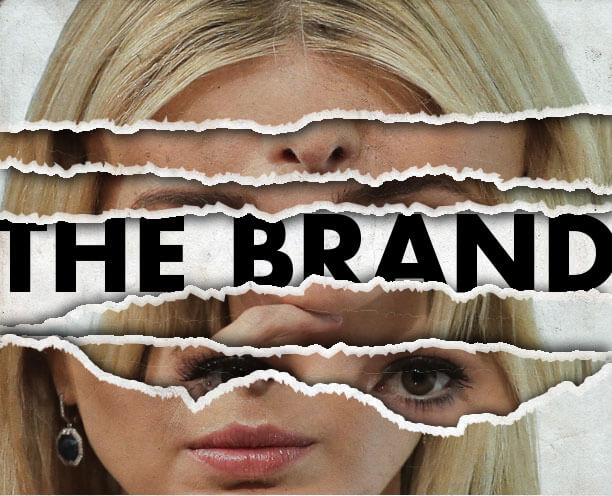 by Jeri Isaacson. | The Brand Collage by Mafe Izaguirre based on the photo by Markus Schreiber © 2017 The Associated Press.

The day in April that Ivanka Trump appeared on the dais with Angela Merkel at the Women’s Summit in Berlin, I was in my office. I was listening to a vibrant and astute young woman in her twenties as she confessed, a little sheepishly, that her new shirt had “trendy” sleeves. She indicated her bell-shaped sleeves. I instantly recognized the sleeves as those that I had seen worn by the various Trump women. Startled, I realized that the images created by these women were seeping into the consciousness of young women.

How could I have thought otherwise? I remembered that I too had taken note of those bell-shaped sleeves, disturbed by an echo of something archaic — a robe, perhaps, or a religious habit. Later, as I watched Ivanka on the dais I understood that she is not only serving as an essential tool of her father’s administration. She is also revising our concept of women and power.

Seated next to Angela Merkel, Ivanka is dressed in what could only be called a “frock.” In her pale blue, delicately flowered dress she appeared an ingenue, slim and untouched. She seemed to have alighted from her tower, a maiden beside a crone. When asked what her role was in her father’s administration, she answered, in her soft voice echoing with spun sugar and spiderwebs, that she did not know. She spoke with an air of spellbinding indifference, even as her response begged the question of what she was doing there at all. No matter. Her stunning remark was really a statement of triumph, a belief in her entitlement to the power that has been bestowed upon her by her father.

Angela Merkel sits next to Ivanka dressed in a red jacket, the requisite variation on the theme of a man’s suit. She looks well used, a real woman who has worked, struggled and bled. Her clothes, and those of the other genuinely powerful women on the dais, seem to represent a conversation that has been taking place for decades: How does an accomplished woman dress?

How does she integrate her femininity with her professionalism?

Ivanka doesn’t engage in this tired discourse. She sits with the other women as an extension of her father, a phallus in a blue flowered dress. Her very presence denigrates the integrity of the occasion, forcing the women around her to give credence to the archaic form of femininity that she brings. Perhaps even more insidious, her besotted devotion to her father dangerously suggests to women that they too can give up on their struggle to achieve authentic feminine power in the world.

Ivanka has made a bargain with her father that any girl can understand. As an oedipal victor, she believes that the power that has been bestowed upon her is her own. She remains psychically fused with her father’s phantasy of phallic omnipotence. There is no mother in the internal world that they share, no maternal function to mediate a relationship to reality.

Real differentiation between father and daughter could never take place. There is no meaning-making in their world. Only power can ensure survival and dominance and, without the underlying sustenance of a life-giving unconscious process, no other goals can be dreamt.

Ivanka’s skill at illusion-making, what she calls “branding,” serves as an “optic” through which to blur the raw sadism and destructiveness that characterize this family dynasty.

Underneath her carefully constructed illusion, she and her father inhabit a part-object world, swirling with broken and destroyed pieces of primitive experience suffused with envy and primal terror. Murderous wishes seep out.

Over and over again images of women as bloody, murdered and mutilated appear in her father’s speeches. Hearing that a woman reporter is “bleeding from wherever” we understand his thin veneer of structure has once again collapsed. He is seeing not a woman but a part object, a vagina, bleeding. The power of women to create, through any means, is something he can neither own nor control, evoking his envy, rage and sadism.

In a chilling juxtaposition of events, the televised version of Margaret Atwood’s “The Handmaid’s Tale” was also released on the day Ivanka appeared in Berlin. “The Handmaid’s Tale” is similar to other allegories of a totalitarian takeover of society; in fact, Atwood wrote it while living in West Berlin in 1984.

In the story, the final phase of a coup occurs when all women are simply sent home from their workplaces and assigned to defined “traditional” roles: (e.g. “Wives,” “Aunts,” “Handmaids.)” Each woman is marked by the clothing she is required to wear. “Wives,” like Ivanka, are women with the only form of power that is allowed in “The Handmaid’s Tale.” Deriving their power from their men, they remain unsullied by the bloody act of childbirth.

In a bizarre triadic tableau, the “Wife” remains present during the required act of intercourse involving both her husband and their “Handmaid.” The “Handmaid’s” role is to give birth to a baby and surrender the baby to the “Wife.” Thus, all of the links between sexual, maternal and creative power in women are broken.

What is unique about “The Handmaid’s Tale” is that it is first and foremost a reminder of the ways that women oppress each other when they have limited sources of power. In an eerie parallel, Ivanka enforces this schema by using her clothing to promote her role in her father’s government. The bell-shaped sleeves are just one of many signifiers of the “brand” that Ivanka is selling to reinforce her father’s power.

Ivanka spins another vision of femininity. She appears cool, bloodless. Her sleek, imperious demeanor combined with her utter lack of empathy for others make her seem almost bored with the niceties of human interaction. She has forfeited the vibrant internal conflict that characterizes women’s struggles with gender and sexuality and power. The phallus has been substituted for the breast; femininity is now a tool for the phallus. Real meaning has been replaced by an “optic” so compelling it is impossible to look away from. But its purpose is to distract us from the most regressive policies towards women we have seen in many decades.

Men who fear and envy the creative power of women have known throughout time that one way to control women is to is to deny them their sexual freedom. We witness this now when the men in our governing legislatures agree that it is a priority to control women’s reproductive rights. Maternity care is considered “optional.” This bald statement of matricide would be suicidal in any species. Here, the maternal presence is so desecrated that the death instinct is taking over.

About all this Ivanka says not a word. “I don’t get involved with politics,” she says. Perhaps; but she is very involved with maintaining her own position of power. At the meeting of all the leaders of the European Union, she slips into her father’s chair, surreptitiously taking his place while he goes off to speak privately with Putin. She is dressed in pale pink. Her sleeves are bell-shaped like the “trendy” sleeves my patient had shown me, but this time they have large bows on them. It looks like a little girl’s party dress. Ivanka is showing us the type of femininity that it takes to have power in her father’s world. Her message is subversive, undermining the kind of real power for which women have worked.

It is not clear how much of this Ivanka knows or understands. She has been locked in her tower with her father for so long that she seems to have truly lost track of how she came to be there. There is certainly no evidence that she has the kind of real power that she thinks she has to stop the rampage of human rights that her father has unleashed. I think it is clear that we need to be as vigilant of Ivanka’s motives as of anyone else associated with her father. In fact, with her self-proclaimed emphasis on “branding,” her ability to influence others is even more insidious.

Ivanka is a siren call to lure women towards her father. We need to closely watch the dangerous signals she is sending to our girls. She is herding, gathering into the fold those who would stray. We need to let ourselves look at her — through her trappings of power, underneath the veil of her “brand” — to the negation of the feminine that lies at the center of her relationship to her father. No matter how afraid we are, it is safer to look into the center of things and see what is real. Resist.