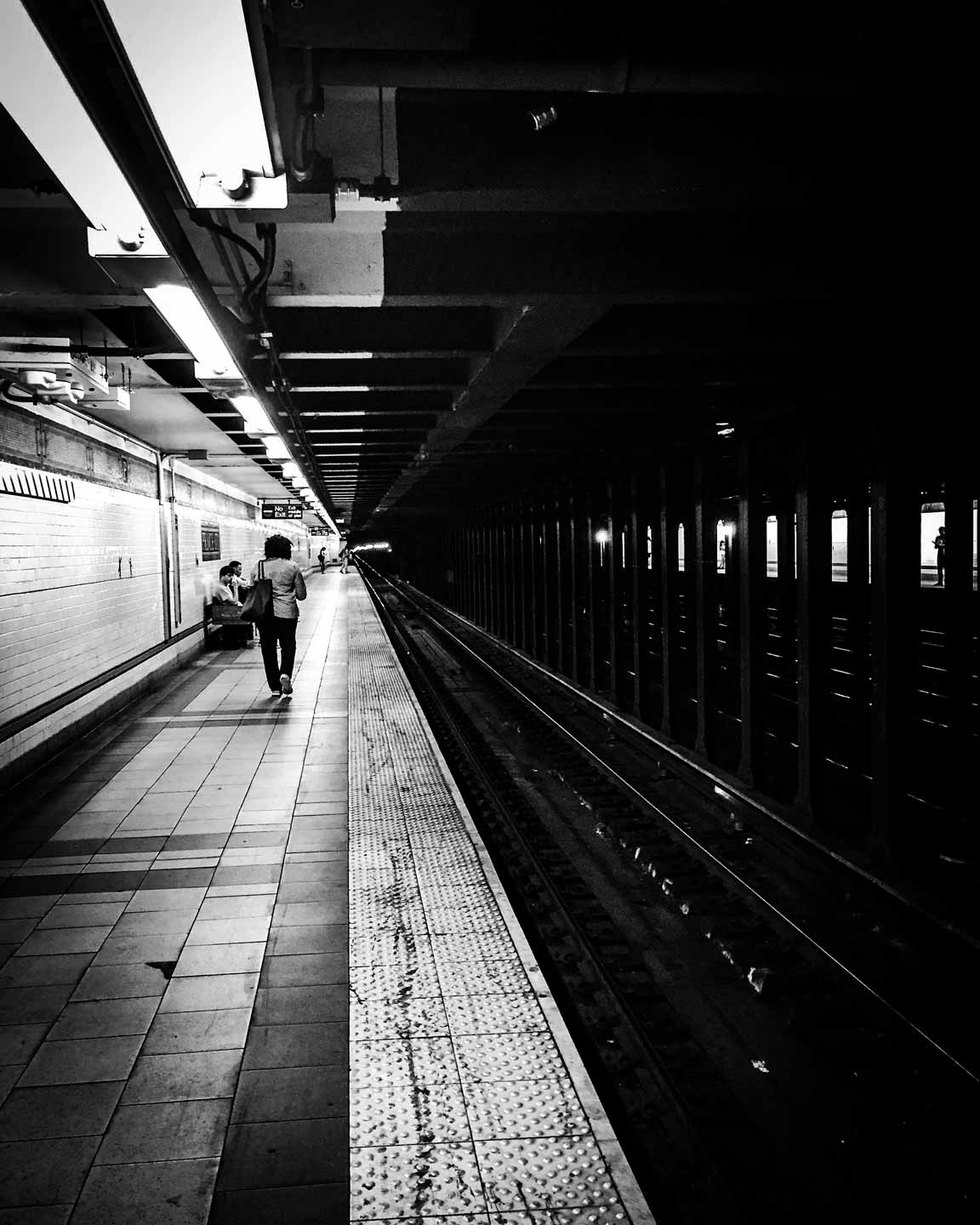 I got on an M train, thinking it was an F train, I wasn’t paying attention, and rode it out to Williamsburg by mistake. I looked up from the story I was reading about two mathematicians, one of them losing his mind, where am I, I was on a bridge, nothing was familiar, then I realized, Oh, it’s the Williamsburg Bridge, I’m not losing my mind, just on the wrong train, going in the wrong direction, way off track. But luckily nothing is unfixable, I got my bearings, got off at the next stop. I could walk to the G train if I knew where it was, but the GPS on my phone wasn’t working, it was an old phone, just three years or so, but in phone years that’s really old, I couldn’t even take a picture with it anymore. I came down the stairs from the station, totally unsure which direction to walk in, so I just chose one way and started walking, and when I passed a guy in a hard hat carrying a plastic bag full of maybe lunch, I asked, Do you know where the G train is? The G train, that’s that way, he said, pointing in the opposite direction, so I turned around but didn’t want to walk with him, what would we talk about, so I stopped and looked at my phone, or pretended to look at it, and then I started walking in the right direction, a little ways behind the man who’d told me where to go, and when he stopped to talk to another man smoking a cigarette outside a bodega, I passed him, and he said, Just right straight ahead, and I thanked him. So now I’m on the G train, which is the same train I ride with my daughter to and from her tap dance class every Tuesday. When we’re coming back these days, it’s already dark, and the train goes elevated, and we can look inside people’s apartments. I see a living room! my daughter says. I see a kitchen! I say. There’s the artist’s studio! she says, and then the train goes underground, and we talk about other things, play I Spy or try to notice people, like the guy with the funny mouth, he just walks around always frowning, or the woman with her eyes closed, what’s she thinking, probably something boring, or the guy who, shhh, listen, he’s singing, what’s he singing?

Can you give me sanctuary

I must find a place to hide

I finish reading the story of the two mathematician lovers, one with Alzheimer’s. I admire the story, its straightforward strangeness, its quiet tragedy, told from the perspective of the wife of a grad student coming from another city to work for the mathematicians, who in fact are lovers. The story reminds me of something our teacher told us in our Clinical Seminar last night. You feel badly for people, she said, that’s why you want to do this work. It was an odd declaration, maybe a little tongue in cheek, but in the moment it seemed perfectly true, given the terribly sad case material one of my classmates was presenting, and after she said it, or maybe before, the teacher told us about her interest in the American prison system, how the head of the education program at a prison was coming to her apartment for dinner that very night, she told us. He himself had been in prison for many years and was a very interesting man. He had an IQ of 180, but that’s another story, she said. In fact, this very morning, sitting at my dining room table, I read a story about life in prison, a prison in California. I didn’t care for the story, although it wasn’t bad. The writer had written a novel that everyone had loved, everyone except me, I didn’t love it. I could do better than this, I thought at one point, as I was reading this story about systematic brutality, about the relentless and inescapable degradation of human life within an American prison, but the story seemed to me to take a kind of pleasure in the degradation, a kind of touristic pleasure, I think, as the G train emerges from the tunnel, the view opens up, there’s Redhook, there’s the water, the Statue of Liberty, New Jersey in the distance, and I think about our teacher from Clinical Seminar, how she said we wanted to become psychoanalysts because we felt badly for people, and I do feel badly for people, not all people, but many people, most people, people in general, with some exceptions, but I’m not sure that’s actually the reason for me wanting to do this work. Really, I think the reason has to do with what happened to me while I was working in prison, teaching a writing class that revolved around the themes of violence and transformation. In prison, I could feel a power inside myself at times, or maybe just a strong wish come alive in me, a wish to work to transform the violence that is increasingly part of the air we breathe, this American air, and I realized there with my students, in that long narrow classroom next to the law library, barred windows looking out on a beautiful view of rolling fields and the Catskill mountains, that I was more interested in learning how to do that better, more interested in learning how to help people transform the violence inside them, the mindless violence that smothers the spirit and kills life, than I was in talking about texts, talking about sentences and paragraphs, although I’m interested in that too, I think, as I hear the conductor announce my stop, and a woman sitting at the end of the car says, I’m taking myself to the beach, I’m sick of not doing shit. Who is she talking to? The man across from her is asleep, buried in his jacket. It has been a long, out-of-the-way journey, much longer than it needed to be, but I’m happy that I wrote something, and I read a story I liked. The faces and bodies on the platform blur, as we pull into the station, I see them through the scratched glass, and then they’re gone, and others appear, other faces, other bodies, more clearly as the train slows down. Good-bye, G train! You used to run so poorly, but somehow you have gotten a lot better over the years. All the other trains have gotten terrible, but you are good, or mostly good. I can always count on you to get me home. ■