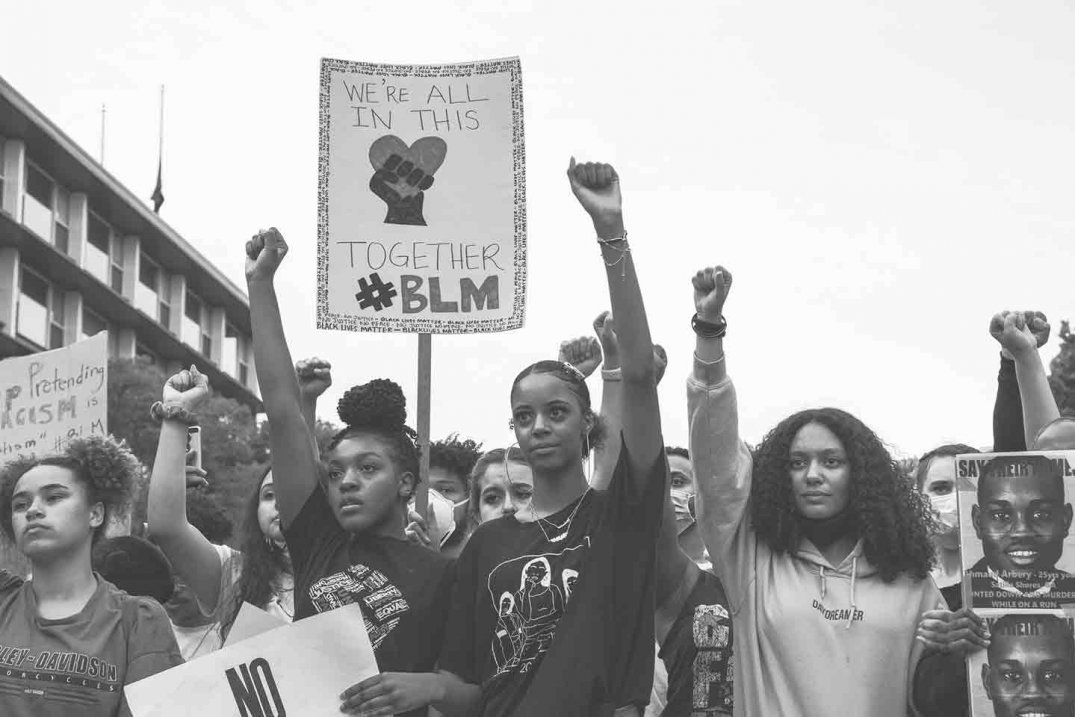 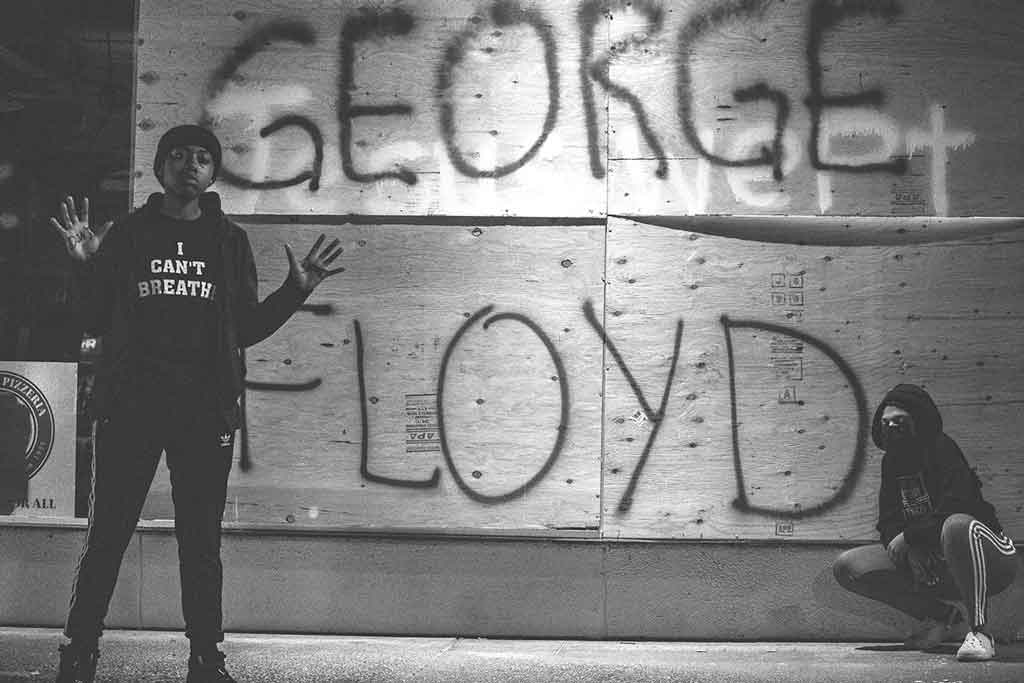 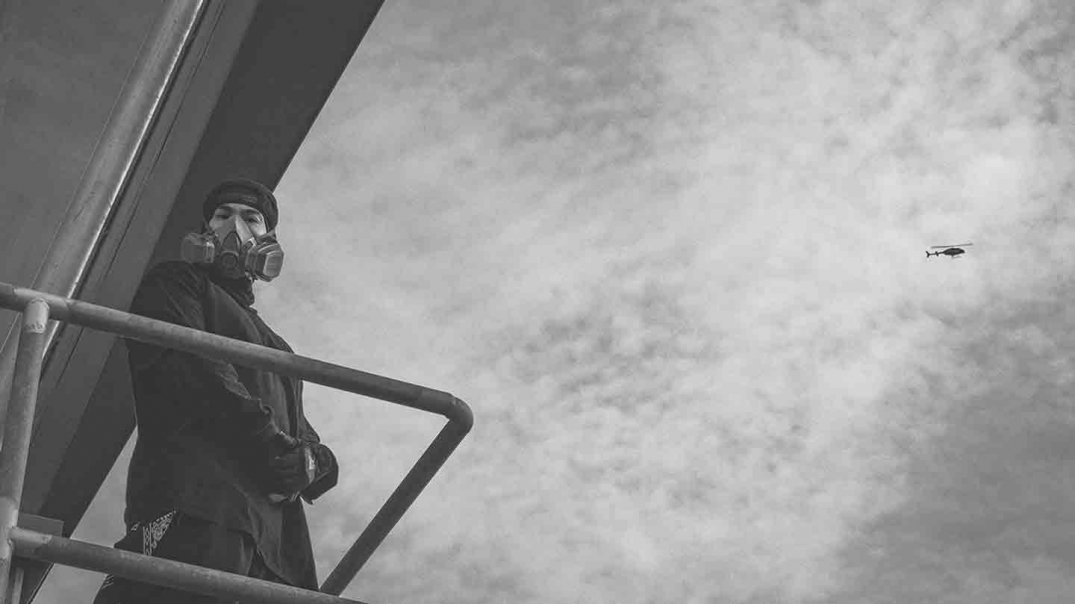 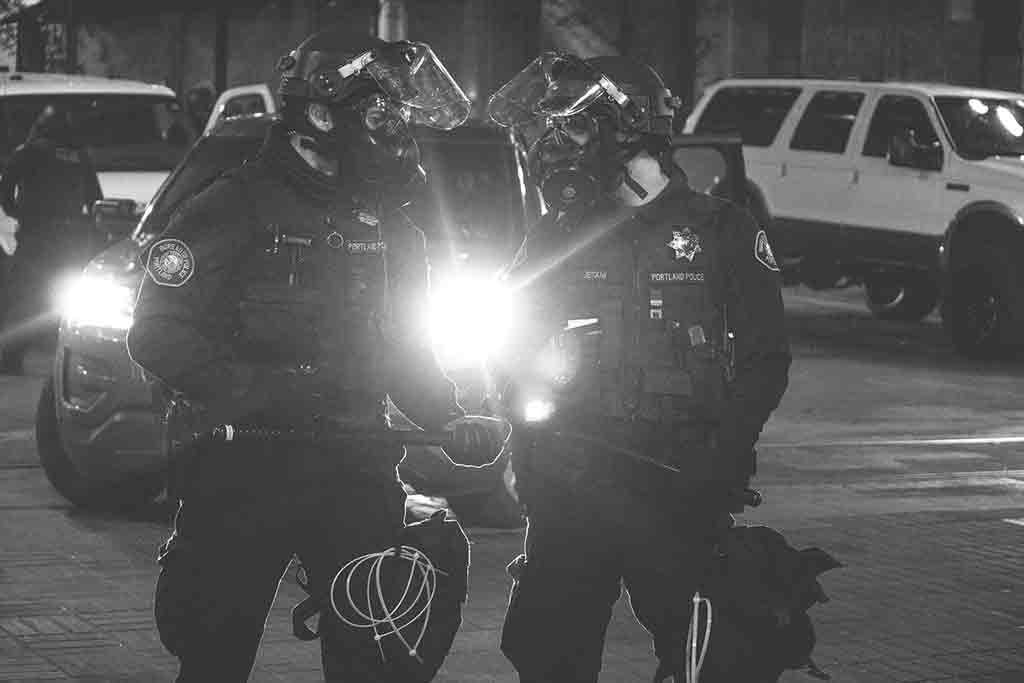 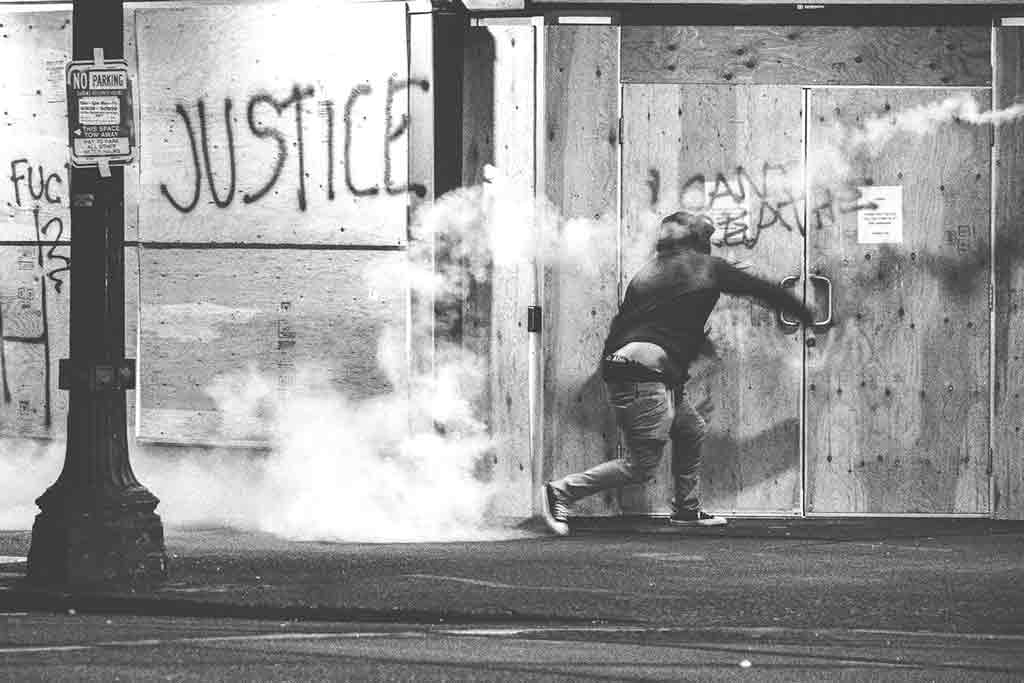 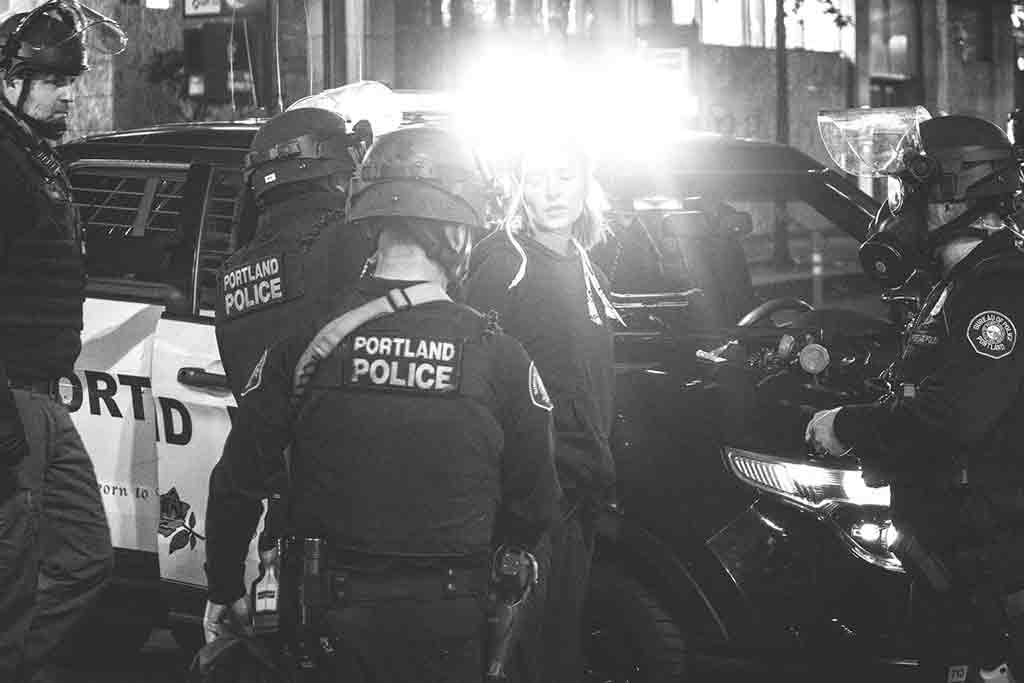 FIRE AND ICE IN PORTLAND

Portland protesters armed with leaf blowers and cardboard signs face off with masked federal agents sporting fatigues and riot gear—guns, truncheons, and shields. Orange tear-gas clouds plume up from the tarmac as the agents grab protesters and hurl them into unmarked cars. These are images typically associated with far-off, war-torn countries ruled by authoritarian regimes—not democratic governments. But in less than six months, some of the most toxic elements of the US national psyche have risen to the surface, denuded by the global pandemic and bull-horned across the country by the divisive and belligerent rhetoric of the White House. One such characteristic is the systemic racial violence that protesters in Portland continue demonstrating against in the wake of the killings of George Floyd, Breonna Taylor, Ahmaud Arbery, and Daniel Prude.

Many agents deployed to Portland were from the Department of Homeland Security (DHS), a giant state apparatus created in the wake of the 9/11 attacks to address the new specter of terrorism that loomed over America. Specifically, they were from Customs and Border Patrol or Immigration Customs Enforcement (ICE), two militarized units who ordinarily make headlines for their heavy-handed approach to immigrants. In Portland, however, these agents were not squaring off against America’s usual lineup of bogeymen—the bearded Islamic fundamentalists or “criminal” immigrants that inhabit the American imagination—but against US citizens; many were white Americans. Trump wasted no time in describing the protesters as a “beehive of terrorists,” justifying the violence, punishment, and detention that ensued. In one tweet, he declared that the DHS would not leave Portland “until local police complete cleanup of Anarchists and Agitators!” conjuring up images of far-left terrorists while also inflaming COVID-tinged anxieties related to infection and disease. By inducing fear of “anti-American” pathogens within the US body politic, the Trump administration substituted the invisible virus with a more concrete image of a threat penetrating our borders, one that can be physically fought. The fantasy of eradicating the “real virus” renders the coronavirus a secondary threat and shifts attention away from Trump’s colossal failure to manage the virus responsibly.

COVID-19 has changed the world as we know it. Under the heel of pandemic anxiety, uncertainty, and chaos—in a reality in which even loved ones may be vectors of viral death—the coronavirus drives all to think, consciously or unconsciously, about their own death. Doubling down on nationalistic and nativist values becomes a way of creating order out of and finding personal meaning in existential chaos. Dividing the world into all good and all bad provides people with a chimeric sense of mastery which dilutes death anxiety. Yet this binary perception undermines reality testing, the capacity to distinguish between reality, fantasy, delusion, and conspiracy. Desperation to understand and predict the reality we live in increases the vulnerability to endorse conspiracy theories. A case in point is QAnon, which, as a strain of Trumpism that has found its way into the mainstream media, touts pseudoscientific findings as inexorable truths. In a recent interview after the Republican National Convention, Trump conjured the idea that sinister and mysterious shadow forces are controlling Joe Biden.

The Trump administration’s disowned racist and xenophobic aggression is projected onto the protestors through DHS and ICE, who portray them as barbaric and dangerous vandals. These accusations justify punitive “law and order” federal interventions to protect and serve “good” (i.e., white, suburban, traditional) Americans from invasion and destruction from “mysterious,” “dark,” “shadow” forces. ICE’s militant attacks pull self-protective responses and expressions of pain and anger from the protesters, which are then framed as unsolicited violence and rioting. This, in turn, shores up the Trumpian fantasy of the protesters as a threat to national safety and security. To the many systemic inequities that contribute to racism and xenophobia, these unconscious dynamics are at play when undesirable and intolerable aspects of the white American self, which has not been brought face-to-face with its long legacy of racism and nativism, are split off and projected onto Black and immigrant Others.

In the Trump administration’s callous and buck-passing responses to the coronavirus pandemic and community-organized action for social and racial justice, we are afforded another glimpse into the primary psychic processes motivating Trump and his base. Prior to the 2018 primaries, President Trump met with high-ups in DHS and ICE to discuss a new “heat ray” weapon, called the “Active Denial System,” to engender the sensation of burning skin in would-be trespassing immigrants who venture too close to the US border. In April this year, at a coronavirus briefing, President Trump suggested that “light and heat” applied internally to the body might cure it of the coronavirus. In the fear-ridden Trumpian internal world, others demanding to be included in the count of who is human threaten the safety and purity of the US with contamination, violence, and death. In this hellscape, both logic and metaphor contort and crumble into an elemental desire for decontamination through destructive rage: heat rays to burn wayward illegal immigrants, heat and light to incinerate the coronavirus, ice to freeze dissent. Undocumented immigrants, Muslims, dreamers, and international workers and students contaminate the American body politic, the coronavirus is infecting American bodies, and the fire in the belly of the movement against structural injustice must be iced. The cast of conspiring and menacing others fuse together into a terrifying and amorphous anarchic energy threatening the lifeblood of the United States. Immigrants, protestors, and the virus are one and must be destroyed by the fire and ice of the “Active Denial System.” At his 2018 meeting with DHS and ICE, Trump also suggested shooting migrants in the legs, building moats populated with snakes and alligators, and erecting spikes on the border wall. Notwithstanding their unspeakable evil, these imagined deterrents are toned with the fabular contents of a mind in early childhood, one in which cackling goblins, fire-breathing dragons, and other magical creatures feel as real as anything else.

In July this year, the city council of Asheville, NC, joined Evanston, IL, by unanimously voting in favor of financial compensation for the descendants of enslaved people for losses due to slavery and Jim Crow. A willingness to negotiate complexity and ambiguity and the emergence of integration are the conditions for the possibility of responsibility and reparation. Anti-Black racism in the United States is a projection of white society’s intolerable badness, through subjugation and dehumanization, onto the Black community and racially marginalized others. This ongoing disavowal has thwarted relational progress and perpetuated deep social divisions along racial lines. The reparative position is a call: I must realize that I have aggressed against the other—and myself in the process—by maintaining a Manichean split between love and hate. From this vantage, the move toward reparation in Asheville and Evanston can be seen as the beginning of a process of historical redress for people, communities, and, indeed, a nation ravaged by racism. A newfound love for the other that emerges with the felt experience of responsibility and the will to repair paves the way for relationships that are built on caring and connectedness, and interrupts the decimating pathology of the current administration. The promise of Asheville and Evanston only has a chance to bloom if Trumpism is overcome at the polls on November 3. ▪

The authors’ weekly discussions, through the summer of 2020, on the intersection and application of Object Relations Theory and Terror Management Theory to contemporary politics in the United States served as the backdrop to this piece.