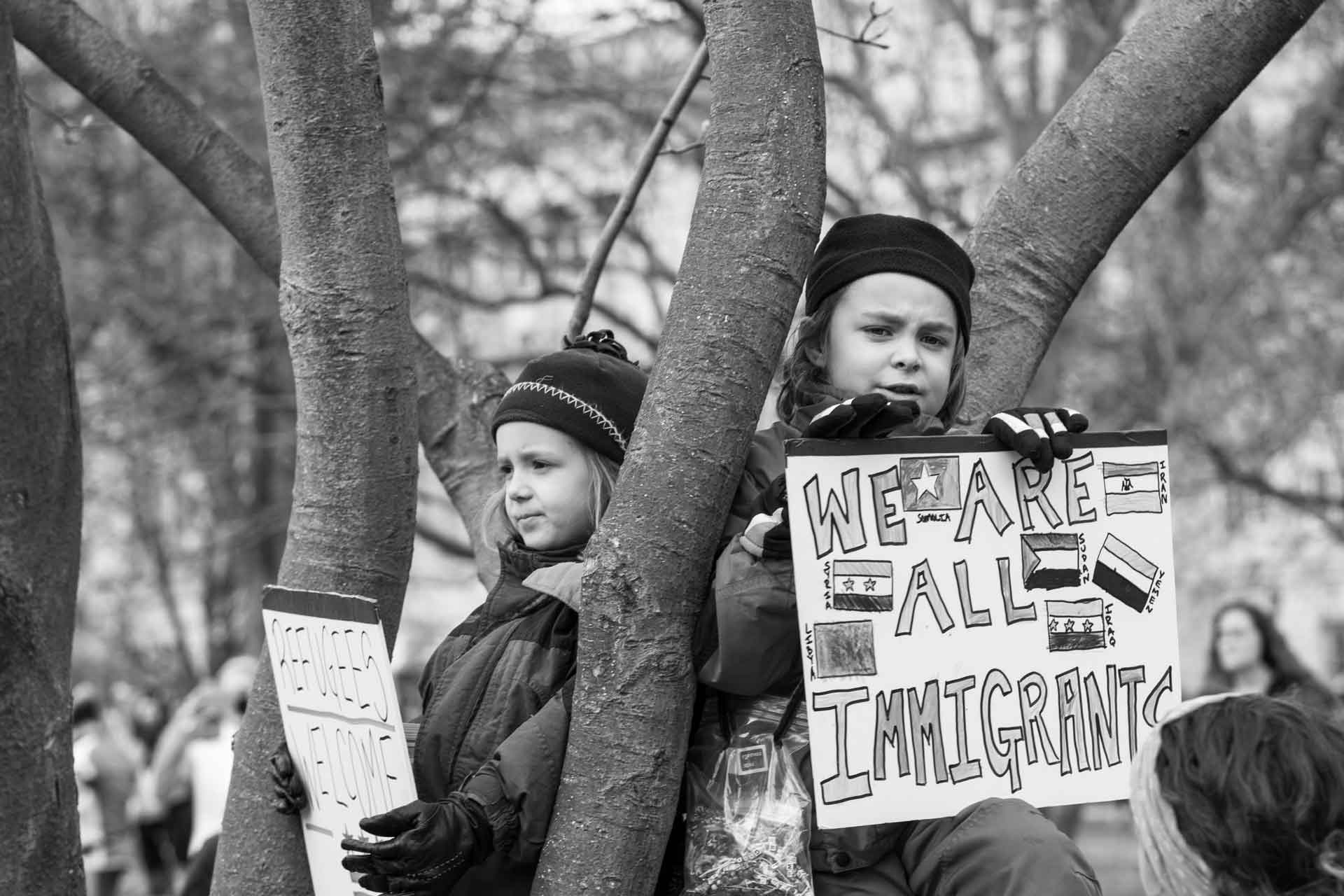 The folks in the images appearing with this essay hold the traumas of racism, immigration, natural disaster and genocide. I show these faces because they reflect experiences of trauma so many of us Americans contain, directly or intergenerationally. I point to these images also to reflect on the ongoing fact that Donald Trump and his supporters’ aggressive words, policies and actions against these already vulnerable people — against what is vulnerable in us all — has been traumatizing or re traumatizing for far too many.

To consider more specifically who holds the burdens of trauma, I reference Harvard University trauma expert Dr. Bessel van der Kolk, who said in his 2014 book, The Body Keeps the Score:

Research by the Centers for Disease Control and Prevention has shown that one in five Americans was sexually molested as a child; one in four was beaten by a parent to the point of a mark being left on their body; and one in three couples engages in physical violence. A quarter of us grew up with alcoholic relatives, and one out of eight witnessed their mother being beaten or hit.

If we add to these statistics the many Americans who experience — personally or intergenerationally — the traumas of racism, slavery, immigration, war, natural disaster, sexual violence and genocide, we start to understand on another level how Donald Trump is traumatogenic. As an alleged perpetrator of sexual assault who underscores his lack of concern about the heavy responsibilities of his role by neglecting history, highlighting divisions, bullying critics and making impulsive decisions, it makes sense that he would, as President of the United States, traumatize us all.

As you read, please imagine the patients I hold in my mind as I write: they are the fifteen or so survivors of trauma I have sat with in the last two years. They are women and men. Six of them come from different countries. They are of all classes, races, religions and ethnicities. Their degrees range from high school diploma to PhD. One of them is deaf. Each of them has been subjugated in ways that have shamed, silenced and isolated them.

I treat adult survivors of sexual assault, domestic violence and childhood sexual abuse. It is they and their responses to the incessant volatility and instability Trump has wrought in the twelve exhausting months since his inauguration, who have prompted me to step out of my comfort zone to speak.

To show what they grapple with, I share some of their quotes:

“I went into my interview and immediately noticed who was white and who wasn’t. I wouldn’t have before…I think it’s because Trump highlights these divisions and I’m now more wary.”

“I have been obsessed with the health care situation. I’m really scared. Because I now have a pre existing condition, you know?”

“After Charlottesville, I’m more afraid to walk down the street. I feel like my being Asian American is highlighted — and not in a good way.”

“We elected a rapist to the presidency. Really? Really?”

“Now that he’s president, How could reporting matter anymore? No one would believe me now.”

A hallmark of suffering from trauma is silence. The impact of what happens to a survivor is so overwhelming they are challenged to speak. Neurobiologically, trauma can literally shut down the speech centers of the brain. The work of trauma treatment is to help those traumatized create a contained and safe space (like this one in ROOM) to encourage talking about what might seem to be too shameful to share. This opens emotional wounds to healing so that they don’t fester and find outlets in maladaptive addictive or obsessive behaviors like alcoholism, cutting, skin picking, drug abuse, eating disorders and hyper sexual activity, to name a few.

Hearing my patients and their struggles with silence and isolation made worse by this aggressive, belligerent, volatile and subjugating president, it was intolerable for me not to speak.

Yet there is now a debate raging about how appropriate it is for mental health professionals to express themselves about a public figure’s fitness as a leader. The Goldwater Rule says American mental health experts must not comment on the mental status of a political leader we have not thoroughly examined in person. The American Psychiatric Association (APA) has recently reemphasized their adoption of Goldwater as one of their ethical guidelines. These guidelines are also incorporated as legal rules by the licencing boards of many states. While no psychiatrist has yet had their license removed on the grounds of violating the Goldwater Rule, the fact that this 1973 ruling is being held over clinicians’ heads as a threat silences skilled experts who have the tools to recognize dangerous behavior and its entrenchment in a psyche. The message of the Goldwater Rule and the current debate surrounding it is that mental health professionals should not overstep and intrude upon the realm of politics.

This obscures the urgency of our times. We are in an unprecedented and unnerving circumstance where it is not mental heath which intrudes upon the realm of politics, but politics which invades our realm of mental health. Aside from Nixon, no other American president has incurred the widespread concern of all — from world leaders, to politicians, to military experts, to human rights advocates, to mental health experts — about his mental fitness and dangerousness to the people he was elected to serve and not subjugate.

Thus we are traumatized and we are vulnerable and we have in Donald Trump a person in the White House who is particularly triggering for anyone who has endured sexual assault, bullying, or who has faced an abusive partner or authority figure. With our increased dependency on mobile devices and social media, we are perpetually exposed to Trump’s toxicity via an ever spinning 24-hour news cycle. This is not healthy on a societal level.

While resisting might imply fighting or aggression, I believe it means speaking and revealing vulnerabilities where it is safe to do so, to truly connect  with oneself and others. For it is in our tender selves that we find truth and personal integrity. Connecting with our vulnerable selves is the way  we can discover our own resilience and impregnable strength.

From my tender and most vulnerable feelings for my patients, I speak and say  we clinicians do have a duty to our patients, to our society, and to ourselves —  a duty to not only to warn of the imminent and serious dangerousness of Donald Trump but also a duty to speak so that we can share our deepest concerns with one another, and keep each other safe. —